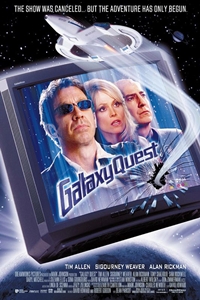 For four years, the courageous crew of the NSEA Protector donned their uniforms and set out on thrilling and often dangerous missions in space - then their series was cancelled. Twenty years later, the five stars of the classic '70s series "Galaxy Quest" are still in costume, making appearances at sci-fi conventions for legions of die-hard fans - but some of those fans are a little more far out than the actors could have ever imagined. A group of aliens who have mistaken intercepted television transmissions for "historical documents" arrive at a convention and whisk "Commander Peter Quincy Taggart" and his crew into space to help them in their all-too-real war against a deadly adversary. With no script, no director and no clue about real space travel, the actors have to turn in the performances of their lives to become the heroes the aliens believe them to be.