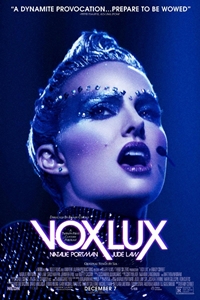 VOX LUX, A 20th Century Portrait, begins in 1999 when teenage Celeste survives a violent tragedy. After singing at a memorial service, Celeste transforms into a burgeoning pop star with the help of her songwriter sister and talent manager. Celeste's meteoric rise to fame dovetails with a personal and national loss of innocence, consequently elevating the young powerhouse to a new kind of celebrity: American icon, secular deity, global superstar. By 2017, adult Celeste is mounting a comeback after a scandalous incident almost derailed her career. Touring in support of her sixth album, a compendium of sci-fi anthems entitled, "Vox Lux," the indomitable, foul-mouthed pop savior must overcome her personal and familial struggles to navigate motherhood, madness and monolithic fame.